The San Gabriel Valley’s “Other” River

Although it links to the San Gabriel River Trail via the Whittier Narrows Recreation Area (see the close-up of Legg Lake and Upper San Gabriel River bikeway), the Rio Hondo is actually a tributary of the LA River (Lario); as you’ll see if you click onto Google’s map, it converges with the mighty Los Angeles near Downey, just south of John Anson Ford Park.

Since there are probably more flood basins along this stretch of river than any other river path, there are more spots where you’re further away from residences and other structures, giving the feeling of being out in the country (tho’ you may not be able to tell what country.) 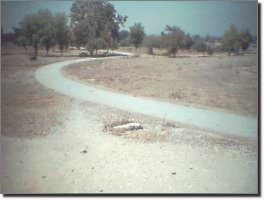 On entering the Whittier Narrows Recreation Area Park, the concrete abruptly ends, although the river continues in a meandering course through lots of jungly overgrowth. At this point, the bike path swerves over into the park, where it cuts through picnic grounds, soccer fields, and greenery. 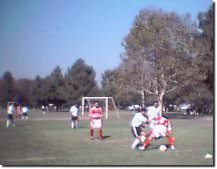 At the northern end of the path, near the gravel pits, you’ll come upon the aptly-named Peck Road Water Conservation Park (left). Below that is a long, extremely barren stretch of concrete river. 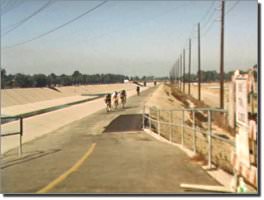 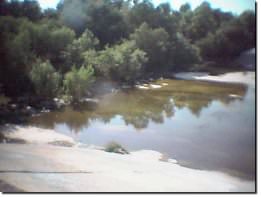 This park is one of the best for greenery: it has more tall pines and older growth than many other bike trail parks, since most of the others are built on landfill.
At the 10 Freeway the bike path makes a right turn and follows alongside the freeway, before dipping down under the road and onward to the south.

Further south, toward the 5 Frwy,
you run into the rust belt.