The Lario Trail, From Lynwood to Long Beach

The outlook is good that some day a bike path will run alongside the L.A. River, from the San Fernando Valley, past downtown all the way to the ocean. As yet, though, this part, called the Lario Trail, and Griffith Park are the only completed sections.

Enter this trail by coming down the Rio Hondo to where it joins the L.A. River. (From the top of the Rio Hondo trail to the ocean is a 28-mile class-I ride). From the confluence of the two rivers, you’ll ride due south, through some of the least desirable cycling land scape you’d find anywhere. Some viewers advise: Don’t plan on stopping for flats, water, finding restrooms, etc. and don’t go alone. 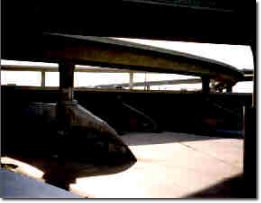 Some Viewers’ Comments:
Â»Â» A couple of the L.A. River underpasses usually have water and crud in them and I have encountered logs and sticks etc probably put there by some idiots who want to see if they can bust up somebody. Be careful going under the darker underpasses. It’s a good idea to lift your dark glasses before entering – that way you can see any obstructions; some of the underpasses are very dark.

Â»Â» I tried to ride the [Lario] trail a few weeks ago and ran into a very formidable barrier in Pico Rivera. I traveled east on the surface street and picked up the LA River trail. There’s something that looks like a very permanent barrier across the path! — Bob Wridley 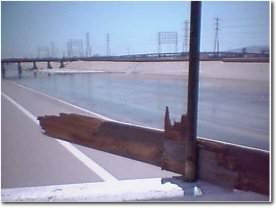 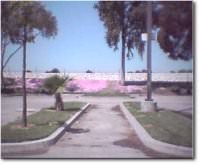 Above: One of the strange barricades along the way.
Left: pretty little Hollydale Park, in South Gate. 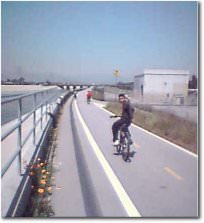 It’s true that there’s lots of construction going on along the trail — in North Long Beach there does appear to be an impassible barrier. Up around South Gate though, you can see where some of the work is already completed, and it looks great! So clean and neat — not a shopping cart in sight! 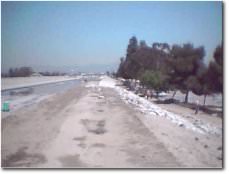 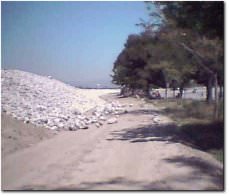 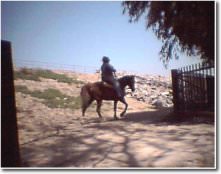 Lario is a trail of contrasts — the typical “river of lost shopping carts” in some areas, almost like another world under the soaring freeway overpasses, and almost rural and serene in others.