South Bay ‘Along the Beach’

From Palos Verdes North to the Marina

This portion of the beach trail runs southward from Marina Del Rey, and has the most naturally spectacular scenery.

The route follows a flat, curving path that snakes among the dunes of Dockweiler Beach State Park; in Manhattan Beach it’s more like a broad boardwalk, and near King Harbor it’s commercial – you’ll have to dismount for part of the way through this busy shopping area. There are plenty of restrooms, restaurants, snack stands, bike rental and repair shops, and path access along the entire route. A great ride, but read cyclists’ warnings!

Google Maps has one showing the entire beach path, from Santa Monica to Redondo. 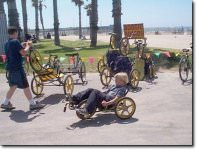 When riding the South bay portion of the bike path a group of regulars started to detour the portion south of the Redondo Beach Pier (walking bike required), and stayed on the street called the Esplanade due to large sand drifts on the bike path during the winter and had many encounters with the RB Police that would describe a progam of educating bicylist in particular with very expensive vehicle code citations that included failing to stop completely at stop signs and standing on the public sidewalk with your bike. We felt that we rode thru this area as concerned, law abiding citizens but were singled out for these tickets (>$271). – – – Steve Hanna 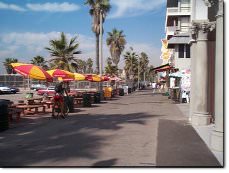 I know that this path gets very busy with people later in the day, so I ride early in the morning. On a June Gloom Sunday morning at 9:00 am (almost home from my ride), I got nailed with an $80.00 ticket for not walking my bike through the area.

I saw the signs, but never realized that I could be fined.(I’ve never heard of being fined for not walking your bike on an official bike path.) Does this mean that if I would happen to be a pedestrian walkingÂ on the bike path that I could be fined? I plan to fight this in court. I’ll give you an update after the trial. Debbie Fend 7/00. 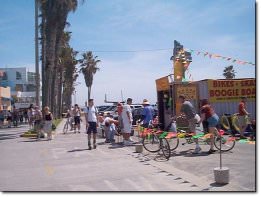 One does not have to walk one’s bike 1/4 mile through the pier – the requirement that you walk your bike through the pier parking structure was eliminated long ago, and there is now only a short (200 feet?) mandatory bike walk area across the pedestrian zone from the parking area to the start of the beach at the south end of the pier.

The major bike walk area is not in Redondo, but in Hermosa Beach (albeit only on crowded weekends) and it extends for about two blocks on either side of Pier Ave, although this is easily bypassed by either riding along adjacent alleyways or on Hermosa Ave. 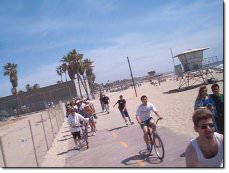 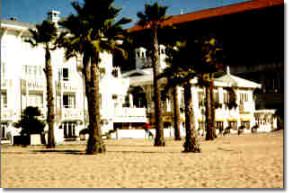 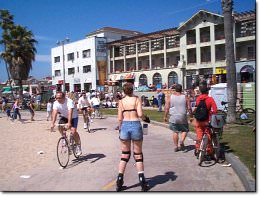