The Area’s Premier Bike Path, from the Mountains to the Ocean

Lower Santa Ana
Start from Yorba Linda for the longest, best ride in the county.

This is the southern half of the Santa Ana River Bikeway – the longest and best off-road cycling route in the Los Angeles area. (Click on the Upper Santa Ana, on this web page, for the northern portion.)

The bikeway runs more than 40 miles in all, from Green River Canyon, where the Santa Ana first emerges from the mountains in San Bernardino, through all kinds of residential neighborhoods and nature preserves, passing by The City, the Big A, and even affording a view of Disneyland’s Matterhorn in the distance.

The path finally reaches the Pacific Ocean between Huntington Beach and Costa Mesa, where you can easily connect to the bikeways to the north or south along the beach.

Fairview and Centennial are two of the larger parks along this half of the route; Mile-Square isn’t too far away, and there are lots of smaller rest stops as well. (Access is virtually continuous.)

To get a really good idea of the many moods of the Santa Ana Trail, Upper and Lower, check out Dan Slater’s photos of Southern California Bicycle Trails.

The parks” along the Santa Ana are ample, with lots of activities and facilities. These pictures were taken in Centennial Park. Another big one is Fairview. 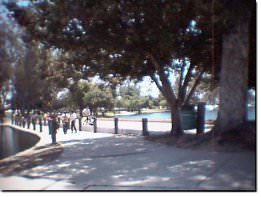 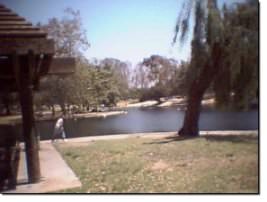 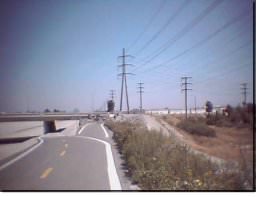 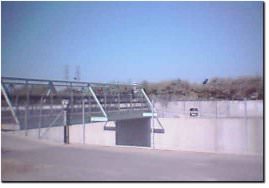 It's still Southern California, however; so it should come as no surprise that the major part of the bike path is the usual "no frills." 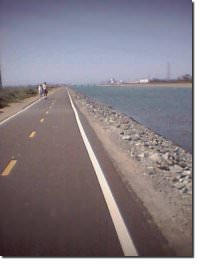 If you start out by riding upstream and find the going surprisingly easy, don't assume you're in the Zone: there's a stiff sea breeze" along this river, and your return ride might not be so effortless! 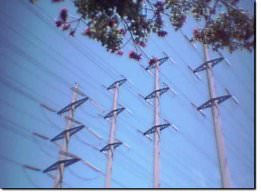 The place is buzzing with power lines -- too bad cyclists can't tap into it! 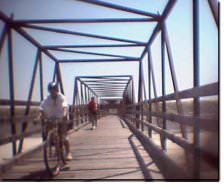 On the right is one of the quaint old wooden bridges that are part of the trail. 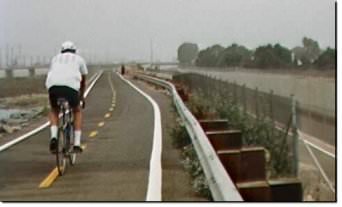 A little overcast . .. that's common, especially nearer to the ocean, in the spring and summer, and on weekend mornings.