Coyote Creek joins the San Gabriel about six miles from the ocean, in the northeast corner of Long Beach. Tho’ the view from the bike path is mostly concrete, it’s still a pleasant ride; keep heading north, even tho’ it looks as though the path is ending – it goes a lot further than you think. When it finally does terminate, you’ll be in a dismal industrial area – but you’re only a few blocks from the City of La Mirada, and its friendly bikepath, to the northeast.

At the southern end of Coyote Creek, the path, like the creek, joins the San Gabriel. See the Mid San Gabriel Trail page on this web site. Thomas Guide, pages 737, 767, 796. 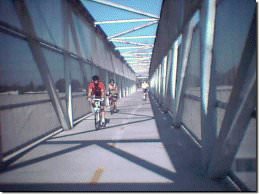 Very few cyclists ever send in comments about this path — it’s surprising, too, because it’s one of the most traveled routes listed on this web site (at least it always has a lot of riders whenever I visit it). Maybe we want to keep it to ourselves!

The Coyote Creek Path seems to be the choice of serious riders — anyway, it has lots of groups with matching shirts and lots of colorful gear. Plus long, straight stretches with few distractions. 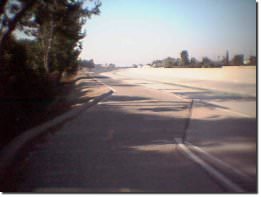 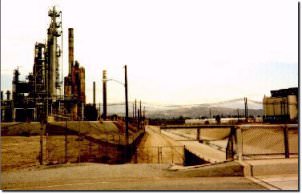 Coyote Creek bike trail has allowed me to commute from Brea to CAl State Long Beach. I take Imperial Hwy West, South on Beach Blvd, West on Rosecrans and South on the river trail. This makes for a nice 22 mile ride to and from work.

For a long loop, i have taken the same path and then South on PCH to the Santa Ana River Trail North back to Brea with the help of a couple side streets and a grueling climb over State College and Bastanchuery.

This ends up being about a 58 mile loop. Watch out for the cars on Imperial. –  Kevin 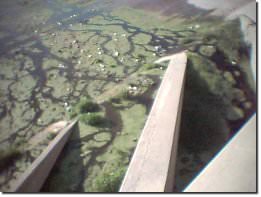 The path does offer some extremes — parts are peaceful and serene, near the northern end it gets pretty ugly (i.e., industrial), and in between runs the gamut from well-kept backyards to green spaces to light commercial areas.

Like its neighbor, the San Gabriel River, Coyote Creek has a number of parks lining its banks. On the right is a nice one: Cerritos Regional Sports Park.