From Griffith Park to Elysian Park

L A River – Griffith Park
There may be hope for L. A. cyclists yet, if the city can tie this path to the new downtown parkland.

The first 3.2 miles, from Riverside Dr. (at Victory) down as far as Los Feliz Blvd., had been opened to the public for quite a few years. The next mile and a half, as far as Fletcher Drive, opened in 2000. The Los Feliz overpass was finally completed, and lighting is now installed all the way.

This bike trail could grow into a fabulous Los Angeles River Project some day with parkland hugging the west bank of the river from above the Sepulveda Basin all the way downtown, and – who knows – maybe one day all the way to Long Beach. That’s what they tell us, anyway.

Access is at each end, and above the golf course. You can ride the river trail in one direction, then make a loop by going back through Griffith Park, along Crystal Springs Rd. Although the path isn’t maintained below Fletcher Drive, the cyclist does encounter the striking Heron Gates, welcoming one and all to Rattlesnake Park. 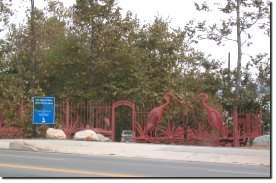 There’s evidence of a community of sorts along the river bed. 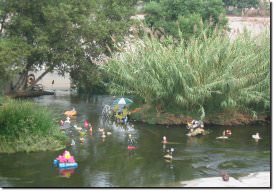 Someone has set up this unusual water garden (between Glendale and Fletcher). 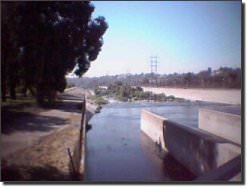 While this route is not exceedingly scenic, it is interesting with its gentle twists and turns in places connected by wide open stretches. There are mild elevation changes. There have been complaints about the exhaust fumes and dust from the adjacent freeways. These complaints are largely exaggerated. There is a steady up river breeze that dissipates exhaust fumes and dust is seldom any problem at all. The steady up river wind surprisingly results in uphill runs well faster than downhill runs. 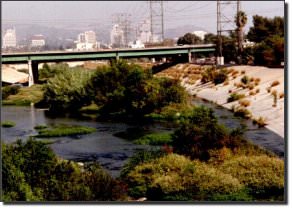 I’ve ridden the LA River path and am very disappointed in it, particularly its location. Riding into the face of oncoming freeway traffic is not my idea of a good time. The exhaust fumes coming off the freeway are horrible. Couldn’t this path have been placed on the Eastside of the river? (perhaps not) There is already a parallel route through Griffith Park that is much more enjoyable and far less auto traffic and exhaust fumes.

The path is clean and well lit. Bike, blader, runner and walker traffic is steady but never congested. You can park on Victory near the entrance to the path or at the little park with a co-ed port-a-potty on Giffith Park Drive (Warning: The park closes at dark). — Peter Wright 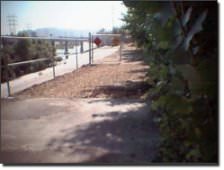 The section of the L.A. River east of Fletcher is paved, but very rough in spots; drainage channels across path sometimes containing effluents from the industrial businesses which back up to the river, and severe bumps due to tree roots pushing up the pavement. The LACBC (Los Angeles County Bicycle Coalition) has rides along this path each year and paints markings to point out and guide around these spots. Despite these hazards, I enjoy riding this path and do so frequently. 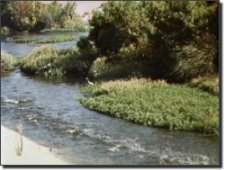 I ride the LA River path by Griffith Park 3 times a week. If you look at the river instead of the freeway, it is a pretty nice ride. I like birds and I have seen herons, egrets, red-hawk eagles, ducks, kingfishers, shore-birds, and many others.  It is a nice smooth ride.  I think it’s great for LA. — Frances